With project CHOMPIN, we are interested in characterizing the interactive effects of thermal stress, nutrient pollution, and predation on the coral holobiont.

A mesocosm tank experiment was conducted in Fall 2016 at the Gump Biological Research Station in Moorea French Polynesia by our collaborators in the Burkepile Lab at UC Santa Barbara. Pocillopora meandrina was stressed by nutrient pollution, high temperature, and predation, individually and in combination. Results show increased microbial community dispersion with stress.  This is evidence for the Anna Karenina Principle in which dysbiotic corals are dysbiotic in their own way, while healthy corals are more similar to each other.  Dispersion results in a destabilization of the microbiome, perhaps a result of the host corals reduced ability to regulate its microbiota. While high temperature alone increases destabilization, the interaction with other stressors produces an antagonistic response.

PhD student Becca Maher conducted the bioinformatic and statistical analyses for this project. In Fall 2017, she conducted a similar mesocosm experiment looking at the interactive effects of predation and nitrate enrichment. Evidence suggests that microbes provide their coral hosts with resistance or resilience to stressors. In this experiment, corals were treated with antibiotics prior to stress to determine how the microbial community responds after significant depletion.

For more information, contact PhD student Becca Maher. Becca will be conducting the field experiments and microbial analyses in collaboration with Mallory Rice and Leila Ezzat in the Burkepile Lab at UC Santa Barbara. 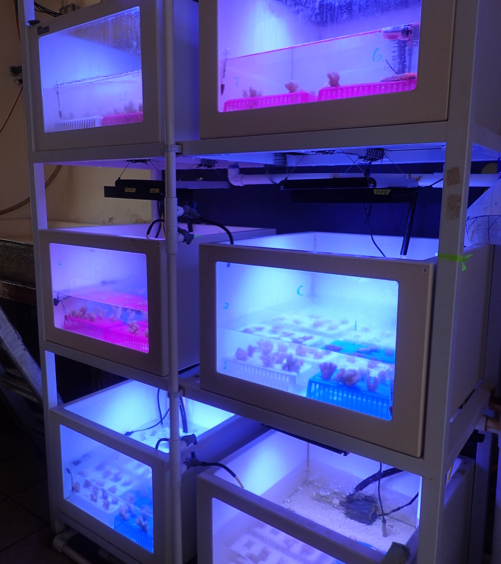